“During May, we are highlighting NCUA’s educational resources that address the unique financial and consumer protection needs of older Americans,” NCUA Board Chairman Rodney E. Hood said. “The theme of Older Americans Month is, ‘Connect, Create, Contribute,’ and the NCUA strives to connect older credit union members with important information to create greater personal financial security and contribute to their overall well-being. This includes both money management information as well as advice for how to recognize and protect themselves from elder financial abuse.”

Throughout the month, the NCUA will be posting helpful tips and consumer advice on social media sites. Follow and share @MyCU.gov (opens new window) on Twitter and the agency’s Facebook page (opens new window).

Member services will continue uninterrupted at all of the credit union’s 22 branch locations in the New York metropolitan area. Members can continue to conduct normal financial transactions, deposit and access funds, make loan payments, and use shares during the conservatorship.

“I congratulate the tribal community for making their vision for this credit union a reality,” NCUA Board Chairman Rodney Hood said. “This charter supports the President’s plan to perpetuate economic growth and establishes greater opportunity and financial security for individuals and businesses by providing affordable services tailored to meeting the needs of the Otoe-Missouria Tribe, its employees, and its businesses.”

NCUA has designated Otoe-Missouria Federal Credit Union as a low-income credit union, based on its potential membership. This designation gives the credit union the ability to accept non-member deposits, obtain grants and loans from the Community Development Revolving Loan Fund, offer secondary capital accounts, and qualify for exemptions from statutory limits on member business lending.

The Otoe-Missouria Development Authority, established in 2006, is sponsoring the new credit union. The Authority serves all Otoe-Missouria Tribal members while assisting the Tribe to become self-sufficient in the operation and development of revenue sources to provide for the Tribe’s present and future needs.

“Prudent actions by the NCUA Board and the agency’s successful stewardship of the Share Insurance Fund made this distribution possible,” NCUA Board Chairman Rodney E. Hood said. “I’m delighted the NCUA has been able to issue nearly $900 million in equity distributions over the past year — money that is going back into communities to support small businesses, promote economic growth, and improve the financial well-being of credit union members across the country.”

Statements were mailed to dividend recipients indicating the amounts they will receive. An institution that filed a quarterly Call Report as a federally insured credit union for at least one reporting period in calendar year 2018 will be eligible for (opens new window) this pro rata distribution.

The NCUA Board approved a $160.1 million dividend in March after the Share Insurance Fund reported an equity ratio of 1.39 percent at the end of 2018. That ratio was above the Board-approved normal operating level of 1.38 percent, triggering a distribution under the Federal Credit Union Act and NCUA’s rules and regulations.

This is the second equity distribution since the closure of the Temporary Corporate Credit Union Stabilization Fund and the transfer of its assets to the Share Insurance Fund in October 2017.

The NCUA Board will continue to monitor the health and risk exposure of the Share Insurance Fund, and will evaluate the normal operating level annually to determine its appropriate level, based on an analysis of data and trends.

ALEXANDRIA, Va. (May 22, 2019) – Today, National Credit Union Administration (NCUA) Chairman Rodney E. Hood announced he has appointed H. Lenwood Brooks, V, to serve as Assistant to the Chairman and Director of External Affairs for the NCUA. 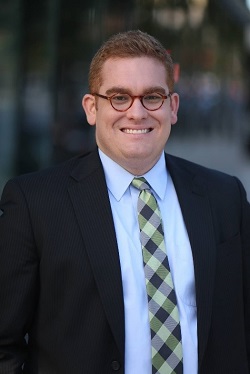 Mr. Brooks joins the NCUA from the Securities Industry and Financial Markets Association, where he served as Vice President of Communications and led the trade association’s external affairs activities. He will report directly to the Chairman and will manage the agency’s Office of Public and Congressional Affairs as well as intergovernmental and stakeholder relations.

“I have known Lenwood for nearly a decade, and I look forward to him being an integral part of my team,” said Chairman Hood. “He has significant public policy experience and combines it with a deep understanding of public affairs.”

Mr. Brooks previously worked on Capitol Hill for Senator Roger F. Wicker (R-Miss.). He advised Senator Wicker and counseled him during his service on the Senate Banking Committee.

“I look forward to serving the NCUA as we seek to strengthen transparency to all stakeholders,” said Mr. Brooks. “The opportunity to assist the agency in external relations and collaborate for initiatives to support the Chairman’s agenda is a great endeavor.”

Mr. Brooks will assume his duties May 28.

ALEXANDRIA, Va. (May 23, 2019) – The National Credit Union Administration Board held its fifth open meeting of 2019 at the agency’s headquarters today and unanimously approved one item:

The Director of the Office of Credit Union Resources and Expansion briefed the Board on the office’s upcoming activities.

The Chief Financial Officer briefed the Board on the performance of the National Credit Union Share Insurance Fund.

The NCUA’s Office of Credit Union Resources and Expansion will offer more resources for credit unions to identify low-income areas they might serve and to assist people organizing credit unions with the chartering process.

The NCUA has a new online low-income designation area workbook that organizing groups and existing credit unions can use to research low-income areas they can target for possible member recruitment and outreach.

A new chartering modernization effort is under way that will automate and streamline the process. The NCUA plans to open a new web portal with information to assist credit union organizers. The agency will offer pre-developed business models that organizing groups can use.

The NCUA also makes training available for all credit unions, including minority depository institutions, through its Learning Management Service and hosts WebEx online meetings and teleconferences for credit unions to discuss management issues, grants and loans, and other topics.

Low-income credit unions interested in 2019 Community Development Revolving Loan Fund grants can submit applications from June 2 through July 20. The NCUA will administer approximately $2 million in grants to the most qualified applicants, subject to the availability of funds.

The Share Insurance Fund (opens new window) reported a net income of $16.1 million and a net position of $15.8 billion for the first quarter of 2019.

Share Insurance Fund reserves for possible losses increased by $36.1 million during the quarter. There was one involuntary liquidation in the first quarter of 2019 projected to cause a loss to the fund.

The first-quarter figures are preliminary and unaudited.

Federal credit unions would be able to accept nonmember and public unit shares up to 50 percent of paid-in and unimpaired capital and surplus under a proposed rule (opens new window) approved by the Board.

The proposed rule is part of the agency’s regulatory reform agenda.

Under the Federal Credit Union Act, a federal credit union may have up to 20 percent of total shares, or $3 million, whichever is greater, from nonmembers under certain circumstances. A federal credit union can also request a waiver from this limit from an NCUA regional director, and that waiver request must include a specific, written plan for how the additional shares would be used.

The proposed rule would raise the nonmember share limit to 50 percent and eliminate the waiver request process. A federal credit union would be required to develop a specific use plan if its nonmember shares, combined with its borrowings, exceeds 70 percent of paid-in and unimpaired capital and surplus.

Comments on the proposed rule must be received within 60 days after publication in the Federal Register.

The NCUA tweets all open Board meetings live. Follow @TheNCUA (opens new window) on Twitter, and access Board Action Memorandums and NCUA rule changes at www.ncua.gov. The NCUA also live streams, archives and posts videos of open Board meetings online.

The webinar, hosted by the National Credit Union Administration and four other federal financial regulatory agencies, is scheduled to begin at 2 p.m. Eastern and run approximately one hour. Participants will be able to log into the webinar and view it on mobile devices using the registration link.

Staff from the NCUA, the Board of Governors of the Federal Reserve System, the Farm Credit Administration, the Federal Deposit Insurance Corporation, and the Office of the Comptroller of the Currency will cover topics including:

A question-and-answer session will follow the presentation. Participants also may submit questions in advance at [email protected]. Credit unions may wish to review the NCUA’s online flood insurance resources.

The webinar, “Bank Enterprise Award Program,” is scheduled to begin at 2 p.m. Eastern and run approximately 60 minutes. Participants will be able to log into the webinar and view it on mobile devices using the registration link, and they should allow pop-ups from this website.

Staff from the NCUA’s Office of Credit Union Resources and Expansion and the Bank Enterprise Award Program will discuss topics including:

The NCUA will offer live Twitter updates during the webinar on @TheNCUA. Participants can submit questions over Twitter anytime during the presentation and in advance at [email protected]. The email’s subject line should read, “Bank Enterprise Award Program.” Please email technical questions about accessing the webinar to [email protected]. This webinar will be closed captioned and archived online approximately three weeks following the live event.

NCUA is the independent federal agency created by the U.S. Congress to regulate, charter and supervise federal credit unions. With the backing of the full faith and credit of the United States, NCUA operates and manages the National Credit Union Share Insurance Fund, insuring the deposits of account holders in all federal credit unions and the overwhelming majority of state-chartered credit unions. At MyCreditUnion.gov (opens new window), NCUA also educates the public on consumer protection and financial literacy issues.

ALEXANDRIA, Va. (June 11, 2019) – Buying a home can be confusing, so the National Credit Union Administration has created a new video that makes the process easier to understand.

The NCUA video, Understanding the Basics of Obtaining a Home Mortgage (opens new window), guides potential homebuyers through the steps of shopping for the right mortgage loan and what to expect during the home buying process.

“An educated consumer is a smarter homebuyer,” NCUA Chairman Rodney E. Hood said. “Knowing what to expect in the process helps give people the confidence they need to make financial decisions for themselves. I encourage credit unions to add these resources to their educational outreach to members.”

The video is part of the agency’s digital campaign for National Homeownership Month (opens new window). Throughout the month, the NCUA will regularly post home buying tips and resources on its Facebook (opens new window) and Twitter (opens new window) sites that credit unions, their members, and consumers in general can use and share.