At the request of the Federal Trade Commission and the Office of the Florida Attorney General, a U.S. district court has temporarily halted and frozen the assets of an Orlando-based operation that used pre-recorded telephone calls, commonly known as robocalls, to pitch purportedly “free” medical alert devices to senior citizens by false representing that the devices had been purchased for them by a relative or friend. The defendants also allegedly led consumers to believe that the devices were endorsed by various health organizations and that they would not be charged anything before the devices were activated.

The agencies are seeking a court order permanently banning the defendants from engaging in the allegedly fraudulent and illegal conduct, and providing restitution to consumers who were victimized.

“These telemarketers used illegal robocalls to make a sales pitch that was 100 percent false,” said Jessica Rich, Director of the Federal Trade Commission’s Bureau of Consumer Protection. “They lied about the product, about whether health organizations had endorsed it, and about its cost.  And all the while, their M.O. was to take advantage of older people’s concerns about their health. We’re so glad to work with our partners in Florida to stop this fraud.” 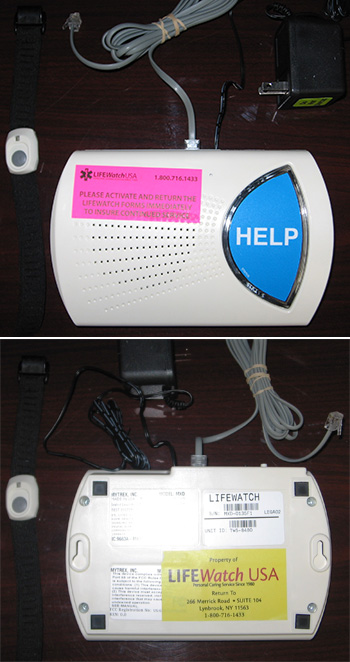 Top and bottom views of the LifeWatch alert device involved in the sales pitch.

“We will not tolerate unscrupulous individuals targeting the elderly. This company received more than $13 million in commissions since March 2012, and we will do everything in our power to compensate consumers who lost money due to the fraudulent medical alert scheme,” said Florida Attorney General Pam Bondi. “I thank the Federal Trade Commission for its partnership in this effort, which involved thousands of affected consumers, and the numerous other agencies who joined in the effort to stop these business practices.”

According to the joint agency complaint, the defendants violated the FTC Act, the Commission’s Telemarketing Sales Rule (TSR), and Florida’s Deceptive and Unfair Trade Practices Act (FDUTPA) by blasting robocalls to senior citizens falsely stating that they were eligible to receive a free medical alert system that was bought for them by a friend, family member, or acquaintance. Many of the consumers who received the defendants’ calls were elderly, live alone, and have limited or fixed incomes.

Consumers who pressed one (1) on their phones for more information were transferred to a live representative who allegedly continued the deception by saying that the medical alert systems are recommended by the American Heart Association (AHA), the American Diabetes Association (ADA), and the National Institute on Aging (NIA). In addition, the telemarketers falsely stated that the monthly monitoring fee for the system will be charged only once the medical alert system has been installed and activated. In reality, the defendants started charging consumers who agreed to receive the system immediately, regardless of whether the system had been activated or not.

Based on this alleged conduct, the joint complaint charges the defendants with misrepresenting a range of facts, including that someone the consumer knows already purchased the system for them, that the defendants’ medical alert system is endorsed by the AHA, ADA, and NIA, and that consumers will not be charged until the system has been activated. The complaint also charges the defendants with violating the TSR by making illegal robocalls, including to consumers on the National Do Not Call Registry, and by failing to disclose the caller’s telephone number or identity.

The Commission vote approving the complaint was 4-0. The complaint was filed in the U.S. District Court for the Middle District of Florida, Orlando Division, on January 6, 2014. The following day, the court entered a temporary restraining order, freezing the defendants’ assets and appointed a temporary receiver over their business. A preliminary injunction hearing in the case is scheduled for January 16, 2014.

The FTC and Florida Attorney General’s Office appreciate the assistance of the following agencies, offices, and organizations in helping to investigate and bring this case: 1) the Indiana Office of the Attorney General; 2) the Minnesota Office of the Attorney General; 3) the Florida Department of Agriculture and Consumer Services; 4) the Better Business Bureau Serving Eastern Missouri and Southern Illinois; 5) the American Heart Association; 6) the American Diabetes Association; 7) the National Institute on Aging;  8) the United States Postal Inspection Service, including its Atlanta, Boston, and Houston divisions; and 9) the Seminole County Sheriff’s Office, Financial Crimes Task Force.

The FTC has tips for consumers, as well as two consumer education videos explaining robocalls and describing what consumers should do when they receive one. See ftc.gov/robocalls for more information. In addition, the FTC has a new consumer blog post on deceptive medical alert robocalls, which can be found on the agency’s website.

NOTE:  The Commission authorizes the filing of a complaint when it has “reason to believe” that the law has been or is being violated, and it appears to the Commission that a proceeding is in the public interest. The complaint is not a finding or ruling that the defendant has actually violated the law. The case will be decided by the court.

The Federal Trade Commission works for consumers to prevent fraudulent, deceptive, and unfair business practices and to provide information to help spot, stop, and avoid them. To file a complaint in English or Spanish, visit the FTC’s online Complaint Assistant or call 1-877-FTC-HELP (1-877-382-4357). The FTC enters complaints into Consumer Sentinel, a secure, online database available to more than 2,000 civil and criminal law enforcement agencies in the U.S. and abroad. The FTC’s website provides free information on a variety of consumer topics. Like the FTC on Facebook, follow us on Twitter, and subscribe to press releases for the latest FTC news and resources.